St Luke’s Supporters are Top of the League!

The team from St Luke’s Hospice were special guests at the Mornflake Stadium, as Crewe Alexandra invited them on a tour of the historic stadium. They were joined by representatives from some of the town’s biggest employers, who also support the League One club as well as the Hospice.

Claire Langston, Head of Fundraising for St Luke’s, jumped at the chance to grace the hallowed turf of Gresty Road, having witnessed plenty of games over the years. She said: ‘’It feels so good to be able to catch up with Charles from Crewe Alex, Stuart from Whitby Morrison and James from Mornflake. We are so lucky to be supported by these wonderful organisations who have such heritage in our community and we really can’t thank them enough.’’ 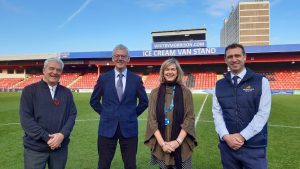 Crewe Alex has a history of supporting the Hospice and has helped with a number of fundraising campaigns in the past. Most recently the club created the ‘Red Lion Club’, a chance for members to win prizes for a small donation with a portion of the proceeds being contributed to St Luke’s.

Mornflake, another local household name which has consistently supported St Luke’s, is kindly helping to sponsor this year’s annual school Christmas event, named ‘The Elf Run’. This time round the event promises to be more successful than ever with over 10,000 local children taking part to raise funds and promote good health, with Mornflake kindly donating some of its tasty porridge for the event.

Whitby Morrison is a dedicated long standing supporter of St Luke’s. Representatives recently visited the Hospice to present a £4000 cheque raised through workplace challenges and raffles. They are also helping to raise funds for St Luke’s through the sale of their yearbook this year.

Claire Langston added: “To receive support and commitment from such influential local organisations is really endearing, especially as St Luke’s looks after so many families and patients from Crewe and the surrounding areas.”

The Hospice cares for patients from mid and south Cheshire and has been embedded in the community for over 34 years so a youngster compared to the heritage of those three key supporters. However organisations like this are vital to St Luke’s with only 15% of funding coming from the government and the remaining 85% being raised from voluntary donations.

For more information on how businesses can become involved and help support St Luke’s as their local Hospice click here.