After 12 years of service the famous St Luke’s bus aptly named ‘Luke the Bus’ will finally be retiring. The St Luke’s bus has driven round Cheshire since 2009, when it was acquired by the Hospice originally to be used as a promotional tool to engage in fundraising activities.

In the last 4 years the bus has mostly been used as a magical ‘Santa’s Grotto’ visiting around 103 schools, nurseries and community Christmas light switch on events. In that time it’s also been used to raise awareness for the Hospice at around 138 community events such as fairs and fetes in various roles. From organised raffles, tombola’s and awareness stands, to sweet stalls, a gin bar and a mobile clothes shop. The St Luke’s bus has been there and done it all. 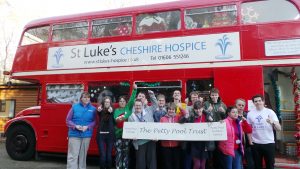 Warehouse Manager and frequent driver of the bus, Simon Armitage said, “Wherever it turned up it always got a smile, it’s an iconic image. I found it quite tough to drive at first but as I got used to it I quite liked driving it around. It always got a reaction.”

Throughout its years at the Hospice, the bus has also been a sign of the fantastic relationship between St Luke’s and Bentley Motors in Crewe who have renovated and re-furbished the bus on a few occasions. Their specialist support has helped keep the bus going for so many years.

Sally Hepton, Director of Government Relations & CSR at Bentley Motors Ltd said, “Bentley colleagues were delighted to support the refurbishment of Luke the Bus over his lifetime. Luke has played a great role raising awareness of the wonderful work St Luke’s do for the local community and has earned his retirement! Thanks to all at St Luke’s for their commitment and care and I wish all at St Luke’s best wishes for the future.”

The bus has touched the lives of many in its time with St Luke’s, none more so than its many volunteer drivers. One of those who loved driving the bus here, there and everywhere was Ted Scaplehorn. He said,

“The bus was quite literally a people magnet: as soon as it pulled up anywhere, people gravitated towards it because they assumed that something’s happening. ‘Luke’ is a true British icon.  During 58 years from the streets of London to the byways of Cheshire, via Japan and a lot of other places, she’s done her various owners proud.  It was a privilege driving her to promote St Luke’s and I wish her well.”

He continued, “Christmas was always extremely busy, and probably my favourite period.  The bus interior was transformed into an enchanting Santa’s Grotto, complete with Christmas tree and fairly lights, and with a fantastic team of volunteer elves, we delivered Santa all over the region, bringing obvious joy to hundreds of children and raising quite a lot of money for the hospice in the process.”

St Luke’s would like to thank everyone who was involved with the bus over the years, especially the volunteer drivers. The bus wouldn’t have got far without you.

You can read more about how ‘Luke’ impacted the community here and a timeline of the bus here.