A lemonade stand set up by three of St Luke’s youngest supporters raised £235 for the Hospice in just four hours.

Siblings Issabel (8), Natasha (7) and Lewis (3) Fox from Winsford decided to hold a lemonade and cake stand for St Luke’s in their front garden on Station Road. 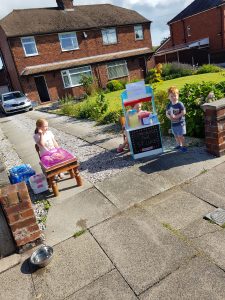 Mum Leah Gresty said: “Issabel decided she wanted to hold a lemonade stand for St Luke’s during the summer holidays. It was just going to be a little thing at the end of the drive, but it just escalated.

“It started out with just neighbours but then my Mum put it on the Winsford Community Forum Facebook page and then loads of people were coming down saying that they’d seen it on Facebook and wanted to support it for St Luke’s. At one point I was worried the road was going to get blocked because there were so many cars. We had to buy more cakes from the shop because we ran out.

“I thought I’d end up doing all the work but the kids stayed out and they did it all themselves for four hours and it was really good. I’m so proud of them. Everybody knows somebody that’s needed St Luke’s, and my Nan also passed away at St Luke’s, so it means a lot to us.”

Seven-year-old Natasha, who goes to Wharton Primary with her sister Issabel, said: “I didn’t think we’d raise that much money. We ate some cakes and lemonade. It was amazing!”

Rachel Hughes, Community Partnerships Fundraiser for St Luke’s, said: “Well done to Issabel, Natasha and Lewis for coming up with such a great idea and raising so much money for patient care here at St Luke’s. We think you’re brilliant! Thanks also to the community of Winsford who turned out to support them.”