Students at the Winsford Academy have raised nearly £6,000 for St Luke’s Hospice in memory of a much-loved member of staff.

More than 700 pupils from years 7 to 10 took part in a three mile sponsored walk in the rain and wind on Friday 19th July in memory of Viv Howard, who taught in the Maths Department at the school. Collectively the students raised £5,841.94 for the Hospice. 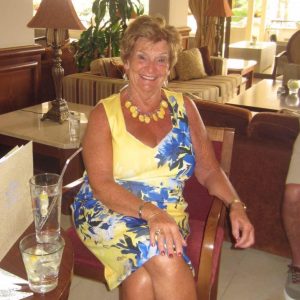 Vice Principal Richard Hicks said: “I’m incredibly proud of the students. It was a big deal for us as a school because this was the first time that we have done such a large-scale sponsored event, and especially with the weather going against us. The pupils did us proud and showed enormous resilience and strength of character on the day to raise so much money for a local charity, in memory of Viv and complete the sponsored walk with huge smiles on their faces.”

Fourteen-year-old Hollie, who raised over £100 in sponsorship, said: “We couldn’t have chosen a worse day to do it, but I felt good after I’d done it. It’s the most exercise I’ve done! And it was for a good cause.”

Jack, who is 15 and raised £109 for St Luke’s, added: “I’d met Mrs Howard in the Maths Department and I wanted to raise money for her for a good cause. It was very wet and windy.”

Viv Howard, who was 74, passed away suddenly last month. She also volunteered at St Luke’s on Reception and in the Family Support Unit at the Hospice.

Matron Wendy Wilson said: “Viv gave so much to the community, not just as a teacher but also as a valued volunteer here at the Hospice for the past 16 years. She touched so many lives and is sadly missed by all those who had the privilege to know her.

“Well done to all the students at Winsford Academy who took part in the sponsored walk in memory of Viv. What an incredible amount of money to raise for St Luke’s, a charity so close to Viv’s heart. Thank you so much.”